Dr. Andrew Weil, author, lecturer and founder of the Program in Integrative Medicine in Tucson, Arizona, states that “The new science of psychoacoustics — the study of the effect of music and sound on the human nervous system — shows that [frequency] can relieve pain, help stroke patients, and benefit other conditions.”

According to author and lecturer Dr. Deepak Chopra, Ayurveda teaches that: “The body is held together by sound, and the presence of disease indicates that some sounds are out of tune… primordial sound is the mysterious link that holds the universe together in a web that is the quantum field.”

(NaturalNews) Human beings have always been looking for the perfect regenerative tonic. In my book the The Tao of Rejuvenation I detail the ancient search and identify some of the great elixirs that have been used to restore health and extend life. Even so, the key understanding is that it is the human body itself that produces the great life restoring chemistry. As it turns out, the long sought elixir of the ancients is actually produced by the body when all of it’s systems are purified and boosted.

When we eat right, when we exercise, when we serve others, when our lives are happy and full of love, the body secretes a powerful regenerative chemistry that protects and extends our days. Over the last several years, research scientists under the direction of Dr. Nathan Bryan at the University of Texas have pointed to nitric oxide as the essential regenerative substance produced by the body. As their research continues to progress they are discovering that nitric oxide deficiency seems to be a culprit in all kinds of imbalances, such as bone loss, diabetes and cancer. Perhaps nitric oxide is the long sought, legendary tonic.

Nitric Oxide (NO) is a fundamental chemical messenger manufactured by the body within the circulatory system and it’s production relaxes and expands the blood pathways. This increases blood flow to all the organs and cells, restoring the health and strength of the cardiovascular tissue. By the age of forty, nitric oxide production begins to decline. This significant decline in NO production appears to be universal. Even so, the cardiovascular system never loses its ability to relax and open. It is the absence of NO that accounts for the fact that a person in their fifties and sixties has about half the circulatory capacity they had in their twenties.

If a tree falls in a forest and there is no one there to hear it, does it make a sound? Assuming there is actually no living being in the forest (which is not likely), the answer is no, it does not make a sound. There need to be three things present for there to be a sound:

Psychoacoustics is the study of how the brain reacts to, and processes sound. The perception of sound is a very detailed, complex event. Much of how our brain handles sound is inherited, with eons of previous human experience embedded in our genetic makeup. Most of that experience was built on the need to survive. Sound was, especially at night, the primary means of knowing what was going on around you.

Water, the most common substance on Earth … It is with us every moment of our lives.. but do you now the secrets of this amazing element?  Learn more about Water, the power of water and how Loving your water makes it healthier, cleaner and tastier!

“Matter is energy cloaked in a different form.” Einstein

“Subatomic particles, and all matter made there from, including our cells, tissues, and bodies, are in fact patterns of activity rather than things.” Frijtof Capra, Physicist

What Is Life Force?

Put simply, it is that which gives life. In Terms of the body, life force is that which differentiates a corpse from a live human being. To use a biblical reference, it is that which God breathed into the dust to produce Adam. It is the life energy people try desperately to hold onto when they think they are dying.

A strong life force makes a human being totally alive, alert, and “present.” while a weak life force results in sluggishness and fatigue. Energy can be increased in a human being. Consequently, the development of ones life force can make an ill person robust or a weak person vibrant not to mention enhance mental clarity.

The concept of “life force” is found in most of the ancient cultures of the world. In India, it is called prana; in China, chi; in Japan, ki; in Native America, The Great Spirit. For all these cultures, and others as well, the idea of “life force” is or was central to their forms of medicine and healing.

Back in Print by Popular Demand! For decades, students of Sacred Geometry, Mandalas, New Science, Metaphysics, Sound Healing and even Crop Circles have coveted these hard-to-find volumes.

Newly Republished Deluxe Edition contains both volumes of Dr. Jenny’s groundbreaking books which vividly depict how audible sound structures matter. 312 pages with over 350 photos, including 16 full-page color images! New Introduction by Christiaan Stuten who assisted Dr. Jenny for 14 years, photographing many of the fascinating images portrayed in this book. 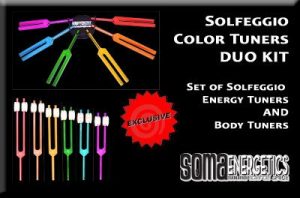